My day-time job is teaching art to kids at the local Boys and Girls Club. I’m blessed that my working life still involves creativity. It has surprised me over the years how inhibited some kids can be, I had assumed that the joy of childom was to be very uninhibited. Instead, I find the majority are worried about things turning out just right or perfect. So, I approach art in as non-judgmental a way as possible and encourage them to “not do as I do and think outside the box”. Naturally, however,  they want to copy me. I used to make an example piece before class to show the kids, but things always ended in disappointment because the kids couldn’t exactly replicate it which was frustrating and it stunted their imagination. At one point I tried to dumb down my art, but that didn’t work for me and I felt like I wasn’t setting a good example. I’ve arrived at the point where I say to the kids “I am A LOT OLDER than you- I’m 31, imagine how good you’ll be in 20+ years!” That seems to appease them a little bit. Also describing the project and then doing it alongside them, effectively creating and discovering together seems to be the trick.

Each week this summer we have a theme and I ended up with some pretty neat artwork by the end of it. I thought I’d share. This is not anything I would usually think to do, but because it was with the kids, I discovered I was less inhibited and in trying to teach the kids open-mindedness and a “let’s see what happens” attitude, I ended up opening up a lot myself.  I’ll show you some things I made during Pirate Week and then Super Hero Week: 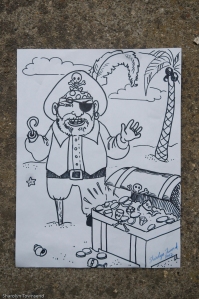 This was a project where I showed the kids pictures of pirates and encouraged them to come up with a character all their own. I demonstrated by drawing along-side them. They liked this guy so much that they asked my not to color him but photocopy him instead so that they could have a coloring page. I obliged. 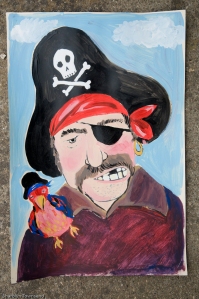 We worked with acrylic paint. I initially started painting this guy to demonstrate how a painting looks finished once all the white of the page is filled in (kids have a resistance to “taking their time” and “filling the page”. I ended up really liking this guy. The kids encouraged me to add a parrot.

The next week was Hero Week. The theme was essentially about local heroes like firemen, policewomen etc., but what was much more inspiring were super heroes with super powers, so we stretched the theme for the sake of art! 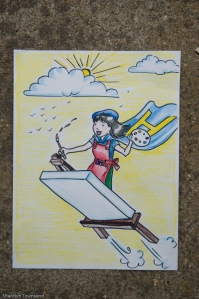 I kind of drew a blank on what to do. I often encourage the kids to draw what they like and know (rather than something so outlandishly difficult that they don’t know how to draw it and end up begging me to do it instead), so that’s what I ended up telling myself to do and came up with: Super Artist! 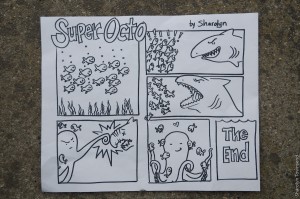 I taught the kids about cartoons and the various cells they could draw. We went over a few conventions and then we went at it. I encouraged everyone to come up with their own hero they could be proud of. The kids as a group agreed that a hero is someone (or thing) that helps and protects others. So I came up with an octopus that saves the little fishies. I also turned this into a coloring page because the kids begged me. I was impressed by the kids’ creativity on this one ( wish I’d had the foresight to bring my camera to work and take pics of their amazing work!). 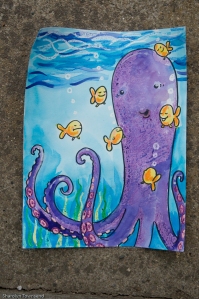 This was a watercolor class dealing with wax resist, sharpie outline and then salt for added visual texture. This was my demo piece and I really like how it came out!

So, though I’ve considered the art I do in the studio and the art I do with the kids very different things, I realized after those two weeks that the separation is beginning to blur. The more I bring what I do to the table, the more the kids seem to be into it and respond to the lessons and the more fun I have!

I appreciate all my kid colleagues who helped me with this break-through moment!

6 thoughts on “Creativity with Kid Assist”